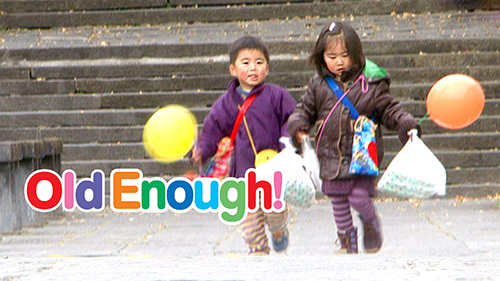 Having announced its first ever deal with Netflix to stream 30 titles in 24 Asian countries and territories in November 2021, Nippon TV, Japan's leading multiplatform entertainment powerhouse, has partnered once again with Netflix, the world's leading streaming service, to make 20 episodes of its hit entertainment show Old Enough! available worldwide with subtitles in 32 languages from March 31st, 2022. This marks the first time that a Nippon TV program will stream globally to over 190 countries on Netflix.

Old Enough! has been sold as a very popular finished program to Asian countries and is also achieving global success as an unscripted format with previous adaptations in Italy, UK, Vietnam, China and most recently in Singapore, currently in its second season. The format rights for international adaptations throughout the world are currently available by Nippon TV.

Old Enough!, currently airing bi-annually on Nippon TV to stellar ratings, centers on big adventures of adorable children running errands on their own for the very first time - all while being shadowed by an incognito camera crew. Each episode features a child, sometimes with a brother or a sister, from different families. In all cases, the producers meticulously gather research from parents and parental organizations, and parents decide the appropriate challenge for each child, for example, a 2-year-old boy going to the supermarket a kilometer away all by himself to buy food for the dinner his mother requested. When the children hit the streets, it is always under the watchful eye of hidden cameras and the show's safety team, who are disguised as joggers, passersby, or gardeners. No matter the situation, the team is never more than a few steps away. Whether excited and overjoyed about the mission, overwhelmed with fear, or filled with boldness and courage, the children are all irresistibly adorable, which makes viewers feel refreshed and want to cheer for them.